Speaking Out Against Your Thousands

"Officials at North Park University say a student by the name of Taylor Volk is no longer enrolled there after an investigation determined her alleged receipt of Trump-inspired hate messages to be a total fabrication."

For each fabricated story the left churn out to prove their case ruins the legitimacy of a dozen genuine stories, whether hate crimes, homophobia or islamophobia or climate science.

You need but look at Brexit to see this; there were real examples of racism and abuse that had clearly fomented during the campaign but who could take any seriously when you had every slight and gloat reported as abuse to the police.

A pliant, client media was busy telling us the Leave campaign was a racists' paradise, whilst giving a platform to every lunatic trot who claimed unintelligently that a rise in national pride equaled fascism, with little understanding in either; it has consistently blamed all ills that beset this country on us saying no to a defunct and pointless technocracy; all the while ignoring the uncomfortable fact that nigh on EVERY doom scenario predicted by Remain has stubbornly refused to come to pass.

Most galling has been the persistent passing of every positive bit of business or economic news as being unrelated to any political momentum of Leave #DespiteBrexit, and forcing the same boring conversation and polished turds of arguments to be replaced in a vain hope this might magically make us all change our minds on something that hasn't happened yet.

And they wonder why noone takes them seriously.

On The Paradox of the USA's Electoral College System And Brexit

The New York post has an interesting article on the Electoral College system, it's inherent flaws and advantages; it's a good read, but I dont think it addresses a more primordial problem with the establishment in general.

Here's the paradox I see at the heart of the electoral college conundrum: say for a minute we ignore the now mounting reports of Vote rigging, the illegal immigrants voting in the election and vote machine code tampering potentially mounting into the millions it was a closely run thing with perhaps less than a percentage point or 2 between Clinton and Trump; to my mind this gives neither candidate a mandate for full execution of their manifestos.

That said the electoral colleges gave it overwhelmingly to Trump; how? Simple: some smaller states have an in-built weighting to the value of their college vote - put simply they get more votes between fewer people's meaning targeting specific states who waver but have a larger clout in voter college numbers, even in aggregate, is a winning strategy.

So it's a terrible system sure; however, do you know what would be a worse system, nay, a system that would split America pretty quickly? One in which policy decisions were made by a minor majority of rich states like California, New York and New Hampshire which permeated every aspect of life and identity for every other state. Texas alone would secede within a minute of such a system.

The electoral college is a break on this hegemony and whilst it is a bad one perhaps it stops a more difficult question from needing to be asked: has federalism gone too far in the lives of ordinary Americans? Has state power? If the establishment believes it hasn't (which is what the answer would be if the elites ever manage to take down the electoral college system) I guarantee this questions would re-emerge.

This is the paradox at the heart of Brexit too; so Remainers don't like the Brexit Vote - Too. Fucking. Bad; we played by your rules, tolerated the cheating in promoting your cause at every level and column, put up with the abuse of being called xenophobes, racists and bigots, and still won, and the rules said we left as a country. If you don't like those rules and are moaning about it now, or complaining that Leave'rs were uninformed or that they were lied to necessitating a de-icer reinforces the point; we give too much weight to too few people in our lives and sometimes that means we get answers we don't like.

You get used to it; some Leave'rs have been putting up with that bullshit for nearly 50 years. 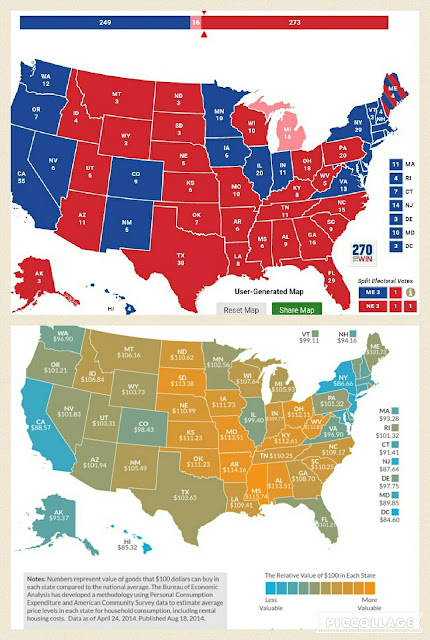