Angry At The Wrong People

Fuel prices have fallen since the Budget, but by less than the 1p cut in duty announced by Chancellor George Osborne, UK-wide research has found.

There was a 0.6p average fall in petrol and diesel from Wednesday to Thursday, the survey by Experian Catalist found.

The 1p cut in duty on petrol and diesel took effect from 1800 GMT on Wednesday.

The Retail Motor Industry Federation (RMI) says many garages will delay implementing the cut until stocks of existing, more expensive fuel are gone.

And how much was this value? 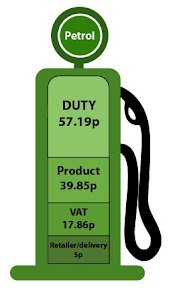 Based on the above forecast you get the following percentages:

Or to put another way 62.2% of the cost of fuel goes into George Osbourne's pockets.

That poor chap who gets your late night beer & rizla run order on your way home walking from town takes just 4p from every £1 you spend on fuel through the week; the government takes 60-bloody pence and positively conflates many of the conflicts that are driving the price skyward.

Aunty Beeb should be ashamed of herself.