The Whole #Yes2AV/#No2AV Debate In a Nutshell 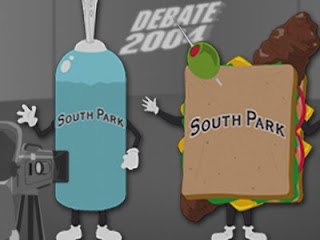 Really, this is all any electoral arguement boils down to.

A lot has been said about the Alternate Voting system and no doubt more will be said in the near future; there are many pros and cons to changing the electoral system so that everyones votes' counted in a more effective way (not withstanding the fact that the type of people who vote for the Monster Raving Loony party or the Free-Banana party would effectively get multiple votes in AV, but lets not split hairs over this).

But really, when all the choice available to you boils down to a giant douche or a turd sandwich, then it really doesn't matter how you vote for them, but how you unvote for them; currently the only way this happens is if the MP in question:

So you catch them in the act of committing crime, you appeal to their conscience or sense of honour or you will them to keel over with all your might.

In no other job in the UK can you earn in excess of a quarter of a million pounds (topped up by a generous expense system and ridiculously long holiday period with no accountability other than a box ticking, glad-handing exercise once every 4-5 years, tickling the bellies of a few, dedicated but ultimately ill-informed and potentially delusional activists in their constituents, the remaining votes coming from people who see it as a tradition for vote for the giant douche or the turd sandwich party's their parents and their parent's parent's voted for, because, you know, "that's democracy an' that".

Our political masters are happy as larry that the only opinion you hold is who has the prettier rosette - arguement over policy never gets to more than the token strawman stage nor is discussing how your selected politico will achieve his aims ever called into question; if they say they will build a mountain of cheese to the moon to set up a space gun to kill martians invading from mars then the cost is not to be mentioned or considered - it just is something no doubt the other party will put a stop to.

Truth is all we do with our current electoral democracy is abrogate responsibility for some pretty crucial aspects of our life: how we will fund our old age, how we will fund our education and that of our children or who we will contract with to take of us if we get sick/have an accident/lose our means of making money. The ones we palm this off to have royally screwed us all over and no AV system will change this.

Nothing short of a revolution in ideology, a veritable waking the f**k up from the comprehensive welfarism we inherited from the past will be enough.

Otherwise someone is going to get stuck holding the cheque for this debacle. People need to learn to be masters of their own destiny, again, and not mere appointees to either a giant douche or turd sandwich to rule over it.

Labels: A cautionary tale, a rosette pinned on a turd by any other colour will still stink as bad, computer says no..., TRINA, vote early spoil often.