In Defence of AV

Having nearly given Mrs. Tomrat an embolism by asking her if it were ok for me to stand for local elections I embarrassingly withdrew at the first hurdle (having also asked LPUK isf I could stand under their banner); the strain on my personal life and time did not stack up against cowtowing to the vast horde of ingrates that currently occupy my particular ward.

The date for the local elections also happens to be the date when we get to choose how we will vote in the future for our mps'; I've covered my thoughts on this earlier post, and whilst my view hasn't changed - electoral reform to the way in which our mps are elected is a poor substitute for improving the ways we un-elect them - I do think my view has evolved somewhat.

Lets assume that the referendum passes and the next election is decided by AV; this graph from an Aunty Beeb Radio 5 phone in discussion and experiment on a mock election under AV shows just one potential result: 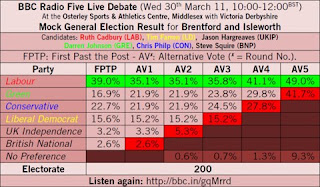 As you can see even with several rounds leading to Nulabourious and the Watermelons coming 1st and 2nd neither group obtain the pre-requisite number of votes to be declared the winner, and as Guido pointed out this result would be declared void.

You see, as I pointed out in this post, the biggest party in any election result is probably the NOTA party; that group of people who, whether through ignorance or apathy, are simply not interested in taking part in our political system - to me this seems to be a gross injustice, in so much as the few grant the power over so many; left leaning zealots, moochers and and looters dictate the election because the NOTA party, that group of people who do not want their life divied up by politics or simply don't care who does the divying, rightly figuring that there vote wont matter; democracy is merely a tool legitimising theft.

If AV has the potential though to remove this legitimacy - by voiding the result - then this is at least part way there to effectively calling time on the whole stitch up; plonking in candidates who will tow the party line, cowtow to the whip or sell out their constituents for vested interests and professional lobby groups will get shown the door, all of them potentially.

Ultimately I think I may even partake in this referendum in favour of the #Yes2AV camp; if anything it cant detract from the FPTP system - you can still vote for only one candidate, just that if they poll the lowest in the group they are eliminated; how is that really that different ito your candidate losing in FPTP? The left will ultimately opt for any quasi-marxist/maoist/stalinist loon who will keep the funding faucet running and who will never sit well with the majority of the electorate.

Ultimately people are working out the scam being presented to them by the elitist clique, this can only add to that.

Labels: a rosette pinned on a turd by any other colour will still stink as bad, stop stealing my money assholes, vote early spoil often.