The Clock Is Ticking 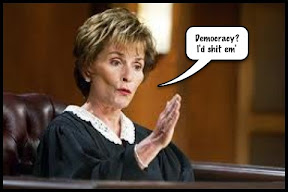 Following my last call for Euroslime Dave to tell the Strasbourg/Brussels consensus to piss off, comes this potential political IED:

Murderers and rapists locked up in psychiatric hospitals are challenging the British Government in a test case at the European Court of Human Rights which could see them win full State benefits.

The case will intensify pressure on David Cameron, after the Prime Minister pledged to review Strasbourg's influence on British law following the row over whether prisoners should have the vote.

The prisoners' votes issue was a ruse, as the Synonblog pointed out; a means for the CINO* Euroslime Dave to tickle faux-euroskeptic ears in the CINO* party and the real ones belonging to the swivel-eyed loons reading the The Daily Fail.

Now it looks increasingly like the unnaccountable, unelected ECHR will be testing how far there powers can take them, which is looking increasingly likely to be anywhere, tramping over the elected scum currently asleep at the wheel in our parliament of whores.

* = Conservative In Name Only