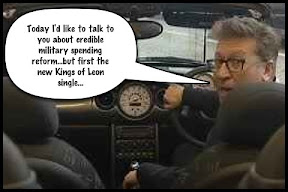 The Ministry of Defence has apologised after a reported 38 soldiers - including one serving on the Afghan front line - were sacked by email.

The troops, all of whom are warrant officers, were told they were being dismissed as ‘the Army has to make significant cutbacks’.

I've said it before and I'll say it again; Team Cambo could do worse than fire the top 5 layers of the civil service and then instruct real reforms rather than kick this particular poo-ball into the long grass.

Noone likes a coward Liam and Dave; still, people like Disingenuous shits even less:

But shadow defence secretary Jim Murphy said the soldiers had been treated in a 'callous, cold-hearted, soulless' way and called on Government ministers to take responsibility for the incident.
Mr Murphy told the Today programme: 'We can't halt every redundancy in the Armed Forces, but this is no way to treat men and women who have served their country fearlessly for so many years.

Lest we forget, Murphy was the Minister for Europe, overseeing the biggest transfer of powers and money to the vast QuANGO that is the European commission and the empowerment act known as the Lisbon Treaty; essentially running interference while the EU takes control.

So now when £10Bn is to be wasted on an unnecessary waste policy while our Air Force, our Navy and our Army are expected to fight wars with little more than an active imagination.